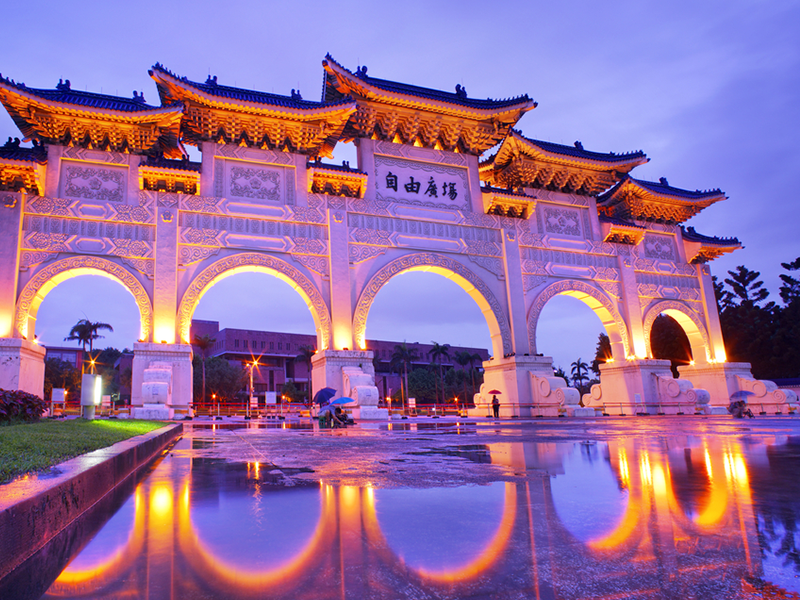 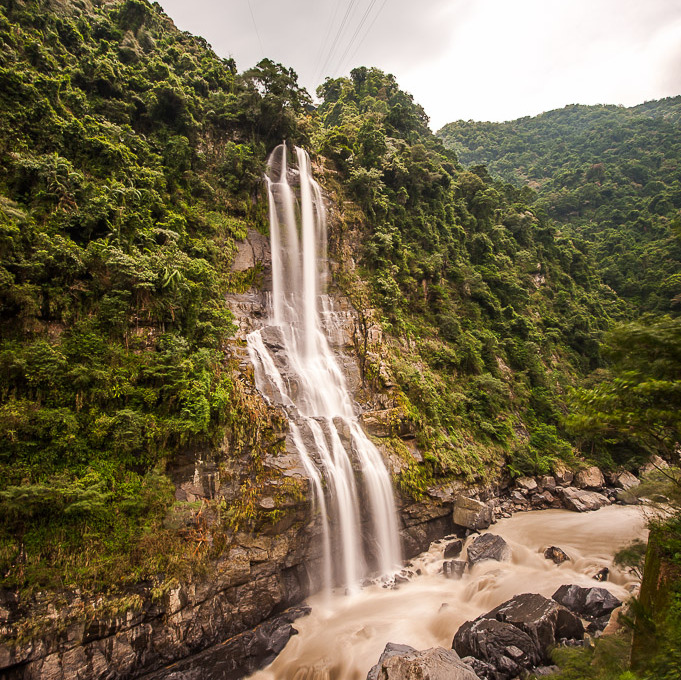 > Rate is not valid on Holy Week and Holidays

> Room rate is based on cheapest room category hotel check-in is 2:00pm and check-out is 12:00pm

Note: Optional tour can arrange 2weeks prior the travel date

ALL RATES/ITINERARY ARE SUBJECT TO CHANGE WITHOUT PRIOR NOTICE

 Chiang Kai-Shek Memorial Hall: an impressive monument to a great Chinese leader. The majestic hall towers over 25 hectares of landscaped gardens, graceful pavilions, and ponds. A statue of late President Chiang looks out over the city from the main building. An elegant Ming-style arch at the main entrance is flanked by two classical-style buildings, the National Theater and the National Concert Hall. The square between the buildings is a popular gathering place during festive occasions.

 Martyrs’ Shrine: an excellent example of classical Ming dynasty architecture, dedicated to the fallen heroes of China’s wars. There is an hourly changing of the guard ceremony at the entrance which many people find interesting.

 National Palace Museum: houses the world’s largest collection of Chinese art treasure. Most of the 620,000 art objects were part of the Chinese imperial collection that was brought to Taiwan for safe-keeping. The collection is too large to be displayed at one time! While many popular pieces remain on permanent display, other items are rotated regularly, making each visit unique.

 The Grand Hotel: is a landmark located at Yuanshan in Zhongshan District, Taipei. The main building of the hotel is one of the world’s tallest Chinese classical buildings, it is 87 meters (285 ft) high. It was also the tallest building in Taiwan from 1973 to 1981.

 Xingtian Temple: is a popular temple dedicated to Guan Yu, patron saint of businessmen, and is relatively recent in origin. This temple is situated on a street corner near the center of the city. Sculptures of dragons feature prominently in this temple’s design. It covers over 7,000 square meters.

 Longshan Temple: Taipei is home to many temples. Of these, Longshan (Dragon Mountain) Temple is the oldest and most famous. It is also one of Taiwan’s finest examples of temple architecture.

 Huaxi Street Night Market: A Chinese traditional post stands at the entrance of Huaxi Street Night Market. Chinese traditional lamps are hung along the street. There are old, historical restaurants along the street that provide great dishes. For example, the Danzai noodle restaurant, the favorite of Japanese tourists, started its business here. Other great dishes like meat soup and squid soup attract many people. In summer, chopped ice plates and fresh juice are in great demand. In winter, dishes with Chinese medicine attract many visitors.

 Taipei 101: Taipei 101 once was the tallest building in the world. The 508-meter structure has 101 floors and is situated at the center of the Hsin Yi District, Taipei City. In the mall, the world-class design and architecture make shopping here a joyful, fashionable activity.

 Wulai: Wulai is a famous mountain village in northern Taiwan and is located in water reservation area. Residents are most aboriginal people (Tai Ya Tribe). There are high mountains along the intersection of Nanshi Creek and Tunho Creek. Beautiful scenery is formed by the high mountains and running rivers. The place is famous for hot springs, trail train, waterfalls and Yushian Amusement Park.

Keelung: Keelung, a 40-minute drive northeast of Taipei, is one of Taiwan’s international seaports and transportation bubs. At Chung Cheng Park, you can view the huge statue of the Goddess of Mercy and also a panoramic view of Keelung Harbor.

 Yehliu Park: Yehliu is famous for its natural rocks formations which are an amazing array of artistic shapes created by erosion and other natural forces. Among the rocks, the Queen’s Head is one of the most famous ones.

 Flowers Clock: The clock is the characteristic of Yangming Park. Water runs around the flower clock and music is played every hour.

 Siaoyoukeng Recreation Area: is a post-volcanic geological landscape area and is located on Mt. Qixing’s northwestern foot. The scenic trail can be reached by turning right on the Xiaoguanyin stop on Yangjin Highway. It is famed for the fumaroles, sulfur crystals, hot springs and spectacular ‘landslide terrain’ formed by post-volcanic activity.

 Lengshueikeng Recreation Area: is a low-lying depression which was created when the lava from Mt. Qixing and Mt. Qigu formed a barrage. Water then accumulated, turning the area into a lake, which eventually leaked out and dried up to expose the lake bottom and form today’s landscape. The water temperature of the hot springs in this area only reaches 40°C (104°F), far below that of other springs in other areas, hence its name Lengshuikeng, which means “cold water pit”.

 Qingtiangang: is a lava terrace formed when the lava from Mt. Zhugao flowed north after its eruption. Because of its flat terrain, a ranch was established and the area was used as a pasture for grazing cattle during the Japanese occupation.

 Jiufen Village: The villages of Jiufen were once centers of gold mining in Taiwan. The gold is gone, but these quaint old villages, built of closely-packed houses clinging to steep mountainsides, continue to offer enchanting scenery and fascinating glimpses into the lifestyles of the past.

 Nanya Rock Formations: The northernmost tourist site in the scenic area, Nanya is noted for its fantastic rock formations and sea-eroded coral shore. The entire coastline here is a veritable sculpture garden that illustrates, in stone, the incomparable artistry of weathering and wave action. The patterned stone topography of Nanya, unique in Taiwan, was formed through the weathering of the sandstone that lines the shore. The oxidation of iron ore within the striations of the stone has given it a beautiful striped pattern.

 Golden Waterfall: is located near the Gold Ecological Park in Jinguashi. Although real gold flowing from these falls would be too good to be true, the water is certainly a beautiful gold color as a result of the combination of regular rainfall in this mining area and the abundance of heavy metal elements deposited in the riverbed.

 Jinguashi 13 Ruins: Following the Japanese surrender at the end of World War II and Taiwan’s restoration in 1945, Taiwan Gold and Copper Mining Bureau was established in 1946 to oversee the mining industry. Unfortunately, as gold deposits ran dry, the once lustrous gold industry went through a downturn and never really recovered. The newly renamed “Taiwan Metal Company” therefore shifted its focus to the burgeoning copper market, which later suffered a rapid crash as the cost of extraction and purification of copper became an infeasible burden.

 Pingxi Sky Lantern Experiexnce: Shifen Town in Pingxi District is one of several townsalongside highway 106, a narrow back road that runs between southern Taipei and southern Keelung. In the past, those who worked or farmed in this remote hillside town used lanterns to inform their families they were safe when facing the risk of being robbed or killed. Nowadays, the lanterns do not function as signals anymore, but used as symbols of peace and good fortune. The most well-known event held here is Pingxi Sky Lantern Festival.

 Shifen Old Street: The Pingxi Branch Rail Line extends 12.9 kilometers through Keelung River Valley from Sandiaoling to Jingtong stations. The line was built in 1918 to transport coal; and in 1992 it was repurposed as a tourism route. Homes hug closely to the tracks, adding to a nostalgic ambiance that has made the area a popular site for filming ads. The romantic beauty of the landscape has made this area a popular visitor attraction.

 Shifen Waterfall: Shifen Waterfall lies between Dahua Station and Shifen Station on the Pingxi Railway Line in Pingxi District, New Taipei City. Torrents of water thunder down this curtain-type fall like a white satin sheet. As the water plunges into the large, deep pool beneath, it raises mists that often enshroud the falls. On sunny days, the mists paint dazzling rainbows in the blue skies: a sight that has earned the waterfall pool the nickname of “Rainbow Pond.” Because its bedrock slopes in the opposite direction of the water flow, Shifen Waterfall is a cascade-type waterfall similar to North America’s Niagara Falls, earning it the nickname of “Taiwan’s Niagara Falls.”